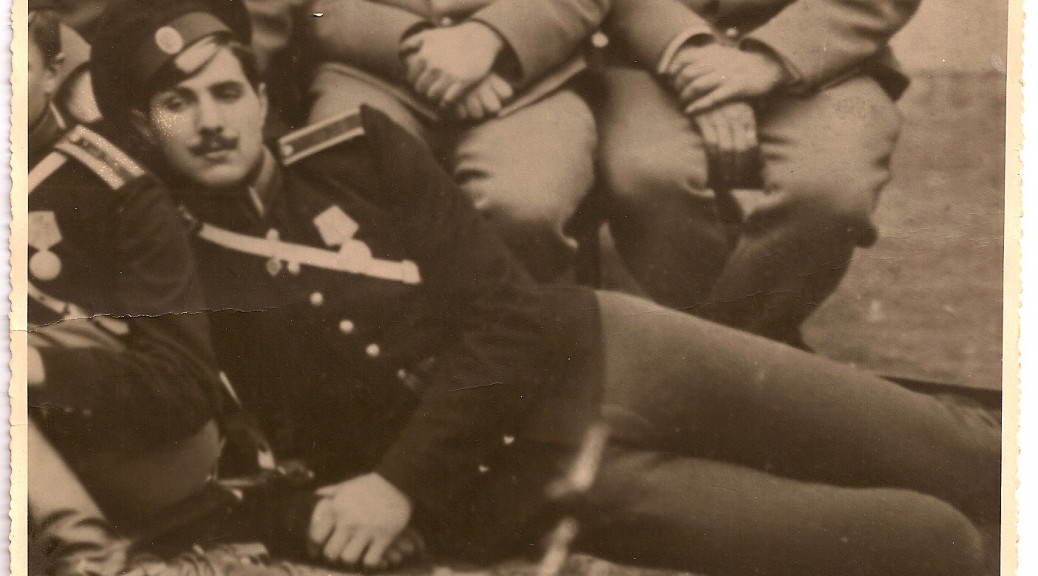 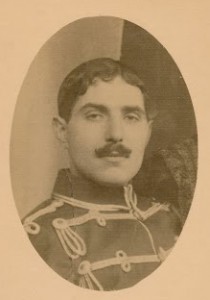 Nikolai ” Kolya” Mikhailovitch / Николай Михайлович Кочубей (1892 -1924) was the son of playwright, Mikhail “Mikhailo” Nikolaievitch / Михаил Николаевич Кочубей (1863-1935) and Pelegea Dmitrievna (née Onoshko) /Пелагея Дмитрьевна Онощко (1863-1930). His mother was considered among the most beautiful women in the region and while her beauty & kindness won her the affection of Mikhailo and their children, her intellect and stubborness helped save the estate of Voronki from being seized by creditors at a crucial time.  She was loyal to her beloved village of Voronki but with her family she fled the estate in 1918 when it was seized by the Bolsheviks and while she spent sometime in Kiev, she died in the countryside at the end of 1930.  Even with the departure of all her sons during the Russian Civil War, it was her daughter, Elena “Nelly” Mikhailovna / Елена Михайловна Кочубей (1890-1972) and her granddaughter little Olga Dmitrievna Wickberg (1921-1985) that would remain near her until her death.  In contrast, Kolya’s father was a larger-than-life playwright, actor, director & benefactor whose generous heart and weak self restraint laid havoc and happiness in equal measure in his wake. While frequently absent due to his engrossing attachment to his work in the theater or traveling between his estates, Mikhailo found comfort in the company of women.  In the twilight of Russia’s pre-Revolitionary years he was tossed around by the confluence of financial problems, political disallusionment, desire for artistic expression and the pull of adventure with the opposite sex.  The consequences would have far reaching consequences on all his sons.  Young Kolya witnessed, starting as a 13 year old cadet, his father sell off estates in the wake of civil unrest in 1905, depart from their home, Voronki in 1909 and then leave from St. Petersburg in 1913 to France, in the company of his new wife Natalia Dmitrievna (néeTregubova) / Наталия Дмитриевна Трегубова (? -1941). It is likely that Kolya, as a young commisioned officer may have seen his father in St. Petersburg but after 1913 they did not see each other again.  Mikhailo and his wife left for France.  They died on the Cote d’Azur, he in 1935 and she six years later.

To set the stage for young Kolya’s upbringing and idyllic childhood, one needs to look no further than the bucolic estate of his grandparents (Nikolai Arkadievitch / Николай Аркадьевич Кочубей (1827 -1868) and Elena “Nelly” Sergeievna (née Princess Volkonskaya) / Елена Сергеевна Волконская (Молчанова, Кочубей, Рахманова)(1835-1916)) that was called Voronki / Вороньки (Черниговская область). No important buildings from this era remain but like any typical estate it had the main house, which was a large wooden structure with decorated windows and a beautiful serpentine starcase that led to a beautiful park.  Surrounding it were buildings that would house the laundry facilities, the kitchen the livestock etc.  In the village was a beautiful church built in the brick old Russian revival style.  The estate is geographically located in the southern part of the Tchernigov province which is north of Kiev (today Bobrovitskiy Region) on the banks of the Supoi river. Even today, it is renowned for its unspoilt beauty and incredible nature. The land is characterized by vast plains punctuated by stands of pine trees and birch trees which are separated by meandering rivers and beautiful lakes. Of course, today this region is in Ukraine, and its link to the family stretched from the family’s political role in the administration of the province, to the many families linked by marriage who populated the province and its large estates.

Nikolai had an idyllic childhood running amongst the various outbuildings of the estate and playing with the farm animals, riding ponies and being spoiled by the buxom peasant women who marveled at his charm and sense of humor. His grandmother, Nelly lived on her estate, Veisbokhovka which was only 30 km away but she took an active role in his education and upbringing. He watched plays and heard operas at the estate’s own theater. He would learn to recite poems and perform in front of guests and his father Mikhailo, an accomplished photographer would take pictures. In addition to speaking Ukrainian with the peasants, he learned to speak French, Russian and German. He became an accomplished horseman and like many boys of his class, he was often out with the brown and white springer spaniels and his gun, shooting waterfowl, hares and foxes.  He dressed in traditional clothes with a long linen embroidered shirt and a leather belt around his waste.

The idyllic life was not meant to be eternal and as a 5 year old boy, he watched Vassya leave for school in The far away city of St. Petersburg. Three years later, after following a course of initial study at home, he too was sent to St. Petersburg. In 1900, at the age of eight he was enrolled at the Nikolaevskiy Kadetskiy Corpus /Николаевский кадетский корпус located at 23 Ofitserskaya Ulitsa. The Corpus was a military school but was differentiated by the fact that it was more comfortable then other similar schools. Kolya was not alone in this big imposing school. In addition to cousins and family friends,  his older brother was already there and the following year his brother Misha would join him.  He benefited from many creature comforts which included the presence of servants.

Kolya would come home for the holidays and make the long journey down from St. Petersburg to Moscow and then Kiev. From there, he would be picked up by one of the new luxury French automobiles that his father owned and driven along the poor roads to Voronki.  He would arrive home wearing his thick wool school uniform and present himself proudly before the household staff who would rush to the main house to greet him. Here was the young pan (Ukrainian honorific that means Sir or Master) that would march up to his groom and proudly tilt his cadet’s cap to the side and order his mount to be prepared. The groom lifted Kolya with joy into the air and then put him down to proceed with preparing the tackle.  His hair was cut short in a military fashion, short and close to the scalp. When his father was present he would shower his young Kolya with kisses and give him and the other children gifts of books, sweets and wooden toys. His affection and kindess was a happy memory even when juxtuposed against the almost unforgiveable departure from their lives in 1913.

Like all little boys, Kolya grew up.  The little boy grew tall and lanky with long strong legs that allowed him to comfortably hold his mount and execute complicated manoeuvers on horseback.  With cossack blood coarsing through his veins, he turned into a dashing Hussar.  He possessed all the character traits of the romantic image of the Russian Hussar officer. If he was not smiling when he looked at you, his heavy eyelids gave him an air of aristocratic disinterest but behind that facade was a fiery personality.  He was over six feet tall, with a handsome mustache that focused ones view on his long oval face but softened his full lips. The heavy mustache was parted on each side and he would make sure to wax the delicate tips so that they subtely curled skywards in the way that only a vain St. Petersburg Hussar would groom himself.  His hair was thick, dark and curly but he made sure to keep it under control with more wax and it lay close to his scalp with only a hint of the wavey hair falling onto his high forehead.  He had a devil-may-care attitude which was all the more charming because of his sense of humor and his love of games and merriment.  His hands were never to far from his papirosi or cigarettes, which he would carefully take into his hand and then proceed to pinch the narrow filter two places and in opposite directions.  Not only was this a good way to hold the papirosa but the pinched filter would help cool the smoke that would then fill his lungs with the taste of smooth Moldavian tobacco. He was quick to sing a ballad and his strong voice was a welcome accompaniment to the beautiful voices of his brothers.  They would spend countless nights around the fire singing, smoking, drinking and playing guitar. It was a perfect Hussar’s life.

While the Kotchoubeys preferred to be near their estates in Ukraine, at the time of Nikolai’s schooling in St. Petersburg, many members of the family were at Nicholas II’s court. Nikolai’s distant aunt, Princess Elena Konstantinovna (née Beloselsky-Belozersky) / Елена Константиновна Белосельская-Белозерская (1869 – 1944) was a lady in waiting to the Empress Alexandra Feodorovna and her husband Lt. General Prince Sergei Viktorovitch / Виктор Сергеевич (1860 -1923) was a close friend and an aide-de-camp to Nicholas II. He accompanied him on to tour of Asia including Japan when Grand Duke Nikolai Aleksandrovitch was still Tsarevitch. Prince Sergei and his wife, were the last owners of the famed Dikanka palace in Poltava. Yet another uncle, Vassili Petrovich, a Guard’s officer was to be elevated to the rank of  Master of Ceremonies  (from Kamer-Junker / камер юнкер) of the Imperial Court in 1912.

As did his brothers, Nikolai went on to study at the Elizabetgradskoe Cavalerskoe Uchileshe ( Елисаветградское кавалерийское училище ). Graduates of both the Korpus and the Uchilishe were destined to serve in cavalry units and the Kotchoubeys were no exception. While two branches of the fa

Nikolai and his two other brothers Vassili & Mikhail fought with their respective regiments from the beginning of WWI. The 10th Hussars entered Hungary in 1914 and they would fight their way into Romania.

Along with his brothers he joined the Voluntary Army. It was November 1918. The brothers were put to work in the intelligence operations of the White Army and served in the OSVAG (office of the Russian Press). They were involved in highly classified missions throughout 1919. Following Denikin’s defeat in 1919 and his retreat to Crimea, Nikolai and his brothers would serve under General Pyotr Wrangel. They were evacuated from Sevastopol aboard various ships of the infamous Wrangel fleet in late 1920. With the rest of the fleeing White army, Nikolai traveled briefly to Constantinople, but tragically his eldest brother Vassili was lost at sea and died. In 1921, he traveled to Sofia, Bulgaria with his brothers  Michael & Sergei.

A thriving White Russian community emerged in Sofia in the 1920s and the three remaining brothers, started to rebuild their lives in emigration. While Michael & Sergei had married two sisters (Mankovsky) in 1919, Nikolai, a dashing cavalry officer with a great voice and zest for life fell in love and married Sofia Alexandrovna (née Grobovskaya) / Софья Александровна Грабовская.  Tragically, shortly after he was married, he died in 1924 in great pain most likely from stomach or pancreatic cancer.