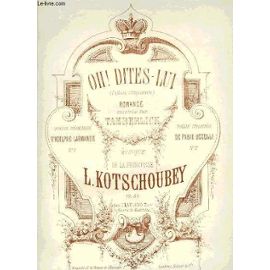 The author of this muscial number was Princess Elisabeth Vassilievna Kotschoubey (née Kotschoubey) (1821-1897) who was a well known composer of both Russian and French popular songs in Russia and later in France. She was  married to her third cousin, Prince Leon Viktorovitch Kotschoubey (1810-1890) and they died childless.  Together they bought the land in Nice to build the Palais Kotchoubey. Construction on the building began in 1878 and four years later it was still unfinished.  At that point, it was sold to an English family, Thompson as the couple lost patience with the pace of the works. The Kotschoubeys bought another property in Mont Boron above Cap Ferrat. Ironically, the palace was completed by its new English owners but today is still known as the Kotschoubey Palace or the Musée des Beaux Arts in Nice.