Milochka’s father Alexander Efimovitch Podust / Александр Ефимович Подуст was a State Councillor / статский советник and a teacher of physics and mathematics in different Gymnasiums in Malorussia including: Cherkassi, Kamenetz-Podolski (1885-1896), Novgorod-Severski, and Kiev.  Her two older brothers were Anatoli Alexandrovitch / Анатолий Александрович (8.2.1884 – ~1944) who died in WWII and Alexander Alexandrovitch Podust / Александр Александрович Подуст (1887—1932) who was born in Kamenetz-Podolski, too. He finished the Kiev Gymnasium No. 1 and received his law degree from Kiev University. He married Tatiana Ivanovna Pilerzhinskaya / Татьяна Ивановна Пилержинская (1894-1989) who remarkably lived to the same age as her sister-in-law and died five years after her. In addition to her two older brothers she had a younger brother Nikolai Alexandrovitch / Николай Александрович (3.11.1893 – ?) and a younger sister, Lidia Alexandrovna / Лидия Александровна (14.1.1885 – ?)

Milochka and Vassya had two children, Olga “Olya” and Georgi “Zhorzh.” The young family spent an idyllic time on Vassya’s estate of Voronki but their happiness was first interrupted by the arrival of WWI and then tragically the young couple were separated by the Civil War and saw each other for the last time in 1919 as Vassya left with his brothers aboard Wrangel’s fleet of ships but he perished at Sea off the Crimean coast in 1920.

Vassya most certainly planned to return for his family. Sources told his brothers that he had given up his place on another ship for a young woman and her baby. Alas, he never returned for his wife and young children and so Milochka stayed with her two children in Kiev. Perhaps her brother and later nephew helped to protect the family from Soviet repression but in any event the family moved to Saratov on the Volga river after WWII. Far from Kiev, far from Moscow and as it turned out far from the threat of Soviet repression which saved the family from imprisonment, starvation and repression. She died a five years before her 100th birthday in Saratov, USSR on June 2nd, 1984 where she is buried. 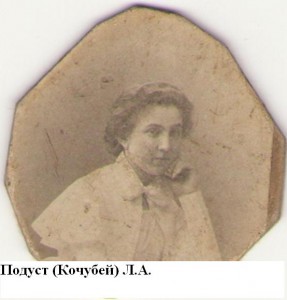 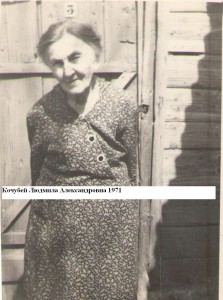