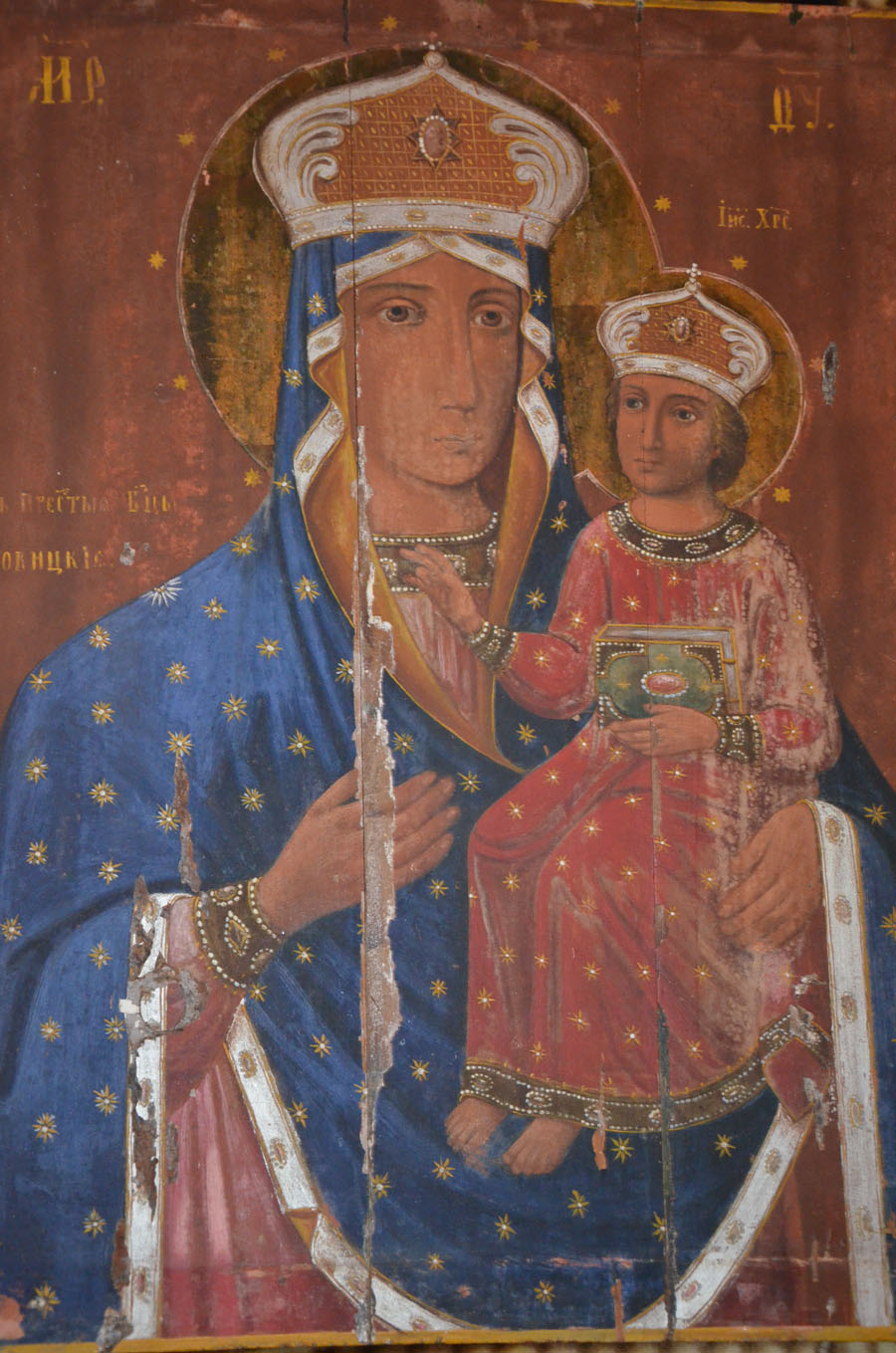 The Miraculous icon of the Theotokos from Dubovitchi (Дубовичская икона Пресвятой Богородицы) was originally found and located in Dubovitchi, Tchernigov Province, Russia*. A hundred years later the land would  belong to Vassili Leontievitch (1640-1708) and remain in the family until 1918. Today while the icon has disappeared, its churchs razed, a village remains surrounding a beautiful park and part of a wooden manor house built in the late Victorian period.

The icon’s first recorded appearance is said to have happened when a shepard, tending his flock by the river Reti, stumbled upon it in the tall grass. The only plausible explanation is that it may have fallen off a military convoy’s carriage that was carrying church related articles.

The poor shepard was waving his knut or whip and accidently struck the icon at which point it emited an incredible light that blinded the shepard and knocked him unconscious. The limp body of the shepard was found by villagers and quickly brought to the local priest. When he awoke, he explained the story to his neighors and they quickly returned to the site where they had found the shepard. Lying in the grass was the icon of the Theotokos. Villagers built a humble chapel to protect the icon and it remained there until the Kotchoubey family financed the construction of the church of the Archangels in the village  of Dubovichi.  The icon was of considerable importance and so a copy of the icon is also in the cathedral of Saint Sophia in Kiev.  Until 1918, believers have prayed to the original icon in Dubovitchi.  Many are convinced that their prayers have been answered and that the the icons powers have blessed them with miraculous healing. The church celebrates the transfer of the icon from the riverside chapel to the main church on the 10th Friday after Easter.

The destruction of churches and icons as well as the imprisonment and murder of the clergy in throughout Russia since 1917 is hard to fathom. It is by all measure an abomination of human behavior and at the very least it fails to be consistent with any of God’s teachings.  This destruction can be clinical explained by understanding that churches, especially in Ukraine,  were the heart of the village, its administrative center and the very soul of the community. The Soviet Union’s drive towards industrialization in the late1920s, from an agrarian economy to an industrial one could only be accomplished by moving people from farms to factories.  It could only be done by mass migration from the countryside to cities. Unlike a similar trend in the West, this migration could not be accomplished by means of logical persuasion but instead by breaking the soul of the community.  The Soviets set out to destroy the vary fabric of the old economy that had interwoven the church and village life into an unbroken cloth of protection, comfort and sustenance.

Concurrently, Soviet policy turned to methods of more efficient farming and following the temporary measures of the New Economic Plan (N.E.P), the government turned to creating collective farms. Man is not inclined to submit to confiscation of property and the break up of families for the sake of a higher and glorious future. Again, brutal, horrible methods of repression were used to accomplish the goal of collective farms.

What ever the justification was at the time-collectivization, industrialization, or anti-kulak repression, churches were ransacked, icons burned and priests driven out of the village in a brutal wave of violence that would ultimately break the Russian countryside and send millions of people to their death or to cities and factories. In this regard, the little village of Dubovitchi was no exception and its two churches, the church of the Archangels and the Kotchoubey family church were stripped of their holy articles and ultimately destroyed.

The waves of distruction that crashed periodically through the quiet countryside from internal forces were but a small preview of coming attractions. In the winter of 1941, the invading German forces had comfortably established themselves in the region.  Ironically, on the eve of WWII, Stalin had begun to rehabilitate the Orthodox Church in the hope of leveraging every sentiment among the Soviet people in an attempt to mobilize the population against the Germans. The arrival of German forces including thousands of panzers roaring across the flat country side of the Ukrainian steps menat that there was little geographical opposition to the movement of troops as they made there way to Stalingrand and ultimately Baku. As the battles raged, what the Bolsheviks did not manage to destroy, the German shells were only to happy to complete and Dubovitchi suffered more damage to its remaining architectural heritage. In the mean time the villagers became participants in the partisan war against the Germans and the little village which had suffered so much since the begining of the century became a heroic one for its role in defeating the German invaders.

No one knows what happened to the icon of the Theotokos which was housed in a beautiful silver reznitsa or icon frame. Legend has it that it will only return when the rightful heirs of the land are restored.  Perhaps it remains in hiding somewhere under the floor boards of a local khutor or in a basement somewhere in the West where it could have been smuggled to save it from Bolshevik destruction. The icon like many others disappeared in 1918 and is lost but maybe someone will discover it.

So some miracles still happen and it came in the form of a simple family of local villagers who despite the stigma of being Orthodox believers under the Soviet Union played their small part in a story that now is being told since the mid-16th century. At the time of the ransacking of churches, a family of believers were able to save 16 icons from the Kotchoubey family church. These icons were taken home and hidden. Among these icons was a copy of the miraculous icon of the Blessed Virgin Mary of Dubovitchi. Like many Christians during this era, the icons may have been hidden under floor boards or behind cupboards or in false walls. In holy days under the cover of darkness, the shades would be drawn and the family would gather around the icons and pray.

The poor family soon saw their grown daughter move to the local city of Glukhov and with her the icons including the image of the Theotokos which by any measure is a large icon and not one to fit easily into a suitcase. Her son Alexei was also a Christian and he carried his family’s faith with him  even as he moved to the capital city of the Ukraine SSR, Kiev. As his grandparents had blessed his mother many years before, Alexei received his mother’s blessing and with the icons departed to work in Kiev. In early 2013 following the death of Alexei, the icons were gifted to the Holy Ascension Monastery in Lugansk. At that time a new monastery being built in a quit corner of Ukraine and the monks were only to happy to receive the gift.

Reverand Father Ioann, who has a great knowledge of icons but whose humility may not allow him to express fully his interest in this genre, identified the icon and that same year it returned on the day of its feast to Dubovitchi for the first time since 1918.

In 2014, Father Ioann along with colleagues from the monastic community returned with the icon to Dubovitchi on 27 June. For the first time since 1918, a member of the Kotchoubey family stood in Dubovitchi again, a land that the family had managed and cared for from the 1670s to1918 and prayed in front of the holy image of the blessed Virgin Mary of Dubovotchi.  This icon is only a copy of the original miraculous icon and like its sister icon, it should have been lost.

Today, icon is performing its own miracle. Surely the fact that it has traversed the 20th century in the care of a humble family and arrived into 2013 intact is its first miracle.  In the loving care of the monks of the Holy Ascenion Monastery in Lugansk, her new purpose may be to heal the deeply divided people who are traversing the terrible dark days of Ukraine’s undeclared Civil War. The icon has found its new purpose and a new home in the war torn city of Lugansk and on a journey that began in the 1550s.