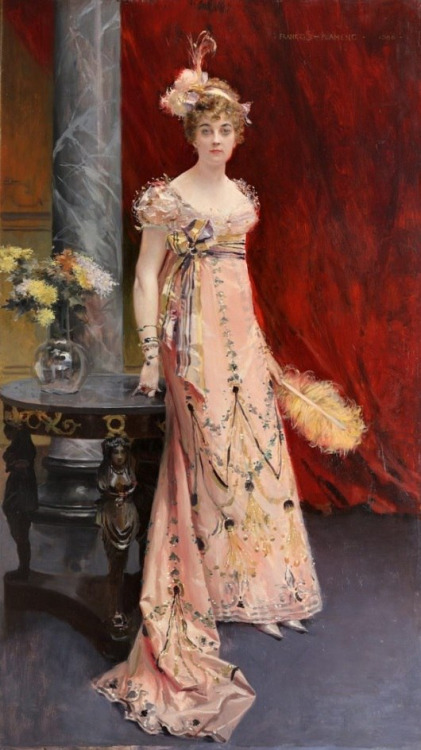 Countess Daria Dmitrievna Beauharnais von Leuchtenberg, great-granddaughter of Emperor Nicholas I, was a member of the wider circle of Russian Imperial family. Born in 1870, she was nicknamed Dolly. In 1893 she married Prince Lev Mikhailovich Kotchoubey, and as Princess Kotchoubey Dolly was immortalized by a French artist Francois Flameng in the portrait above. According to some reports Dolly was banished from Russia in 1905 for being very vocal about her criticism of the Tsar and his wife, and she lived in France until 1911, when she was allowed to return. Wasting no time she divorced, leaving her husband and children, and opening doors to a new love. According to a romantic story she told: “Once, when she was sailing abroad in the company of her chaperon, a battleship under the command of Captain Vladimir E. Grävenitz (1872-1916) passed by sailing in the opposite direction. The captain noticed Dolly through his binoculars and, amazed by her beauty, he signalled the steamship to halt, took a boat, came aboard to introduce himself, and finally kidnapped Dolly right from under the nose of the latter´s chaperon.” Truth or not, Dolly married this man in 1912, unfortunatelly, because of professional fall from grace he commited suicide.

At the time of 1917 revolution Dolly was at the front, organizing medical help to Russian soldiers. Upon the news from the capital she went to Bavaria, only to inexplicably return back to Russia, taking a name “Dora Leuchtenberg”. When asked about her political standing, she replied on a work application form: “… non-party, though of the political parties she sympathises with the Russian Communist Party, which is why, after the revolution in Germany, she remained in Russia.” Whatever her dreams for the future, she certainly did not expect to be moved out of her comfortable flat with almost nothing, laying unconscious on the pavement, until a kind man gave her a coat before she froze to death , and finding herself completely without money. The kind man who had taken pity on her was named Victor Alexandrovich Markezetti. Before a year passed, Dolly married him.

Victor managed to get a job as a head of the Library of World Literature and quickly made his wife his assistent. Behind an assumed name of Dora and her new surname, Dolly remained the true aristocrat and made little effort to hide her noble background, a move very dangerous at the time in Russia. Yet somehow, for a considerable time, nothing came out of it, which resulted in whispered accusation of her being a spy for the Communists. Dolly publicly claimed that she personally knew Lenin and Trotsky, and she had acquired an immunity certificate. A certain Mary Peterson, an American journalist who met Dolly, left the following account of her: “The lady advanced in a stately manner, stopped in front of the tables, stretching out her hand favourably, as if to be kissed (though nobody kissed it), and I was amazed by the fact that many of the staff immediately found a pretext to end their conversations and disappear, whilst others, having caught sight of her, tried to hide behind bookcases or columns … She couldn´t have worked as a provocateaur or a secret informant, as the more cowardly asserted, but her speech, in all five languages, was studded with glimmering diamonds in bejewelled settings, such as the name of her grandmother, Maria Nikolaevna … All that annoyed and excited fantasies of the real informant who were hiding themselves behind the bookcases.”

In fact Dolly´s initial favouritism of Communism quickly vanished and as the year passed by her hatred for it grew. It is possible she was involved in a counterespionage plot, perhaps working as a double agent. Unfortunately the events of her life in the 20s and 30s remain obscure. In 1937 she and her husband were arrested by KGB and interrogated for months. Dolly confessed to everything she had been charged with, the final papers of the confession bearing a signature of 67-years-old, broken woman. She admitted all,: that her husband was a member of Gestapo, that she was a part of German terrorist organization, , that she was involved in assassination plots against Soviet politicians, that she held secret counterrevolutionary meetings and was hiding foreign agents in her flat. On October 29th she was sentenced to death and shot less than a week later.