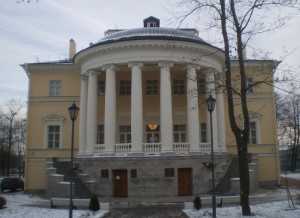 After Napoleon’s retreat in 1812 and the return of Russian troops from France in 1814, St. Petersburg became a den of construction. At the epicenter of this new found enthousiasm for building was none other than the Emperor Alexander I who as an architect was leading the charge in creating a European capital to rival that of his counterparts in Vienna, Paris and Berlin. Interestingly, the design for the Kotchoubey palace which would become Viktor Pavlovitch’s summer residence was overseen by his childhood friend, the Emperor. The palace was begun in 1817 following a design submitted by the Emperor in 1816 and completed in 1818 while the gardens were completed in 1824. The building was built by the architect P.V.Neelov, but completed by Vassili Petrovitch Stasov in the Russian neoclassivcal style. The building echoed other buildings that were designed by Giacomo Quarenghi, an Italian architect working in Russia who designed places and whimsical classical furniture that can by found in the museum of Ostakino in Moscow  which once belonged to the Cheremeteffs. Quarenghi was also hired to build the famous Kotchoubey Palace in Dikanka which was burned to the ground in 1918.

The actual palace was gifted by the emperor to Count Viktor Pavlovitch’s wife, Countess Maria Vassilievna (née Princess Vassiltchikova) in April 1817. After the death of Prince Viktor Pavlovitch in 1834, she would sell the palace to Grand Duke Nikolai Nikolaivitch to cover the debts that the family had incurred. It would be added to and renovated several times but it would remian in the Imperial family until the 20th century.
Source:
http://www.encspb.ru/object/2846961506?lc=en
http://www.citywalls.ru/house18552.html#photo141422