Named after Prince Lev Victorovitch Kotschoubey who was a passionate horticulturalist at his family’s estate of Dikanka and in France where he was made a member of the French Horticultural Society in 1851. 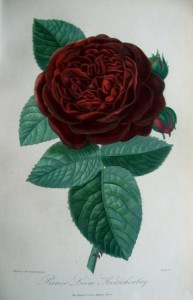 It is described as a hybrid perpetural which was bred in 1852 and is described by Marest as bright carmine-red, vividly shaded, large, double, very beautifully cupped, effectual.